A downloadable game for Windows, macOS, and Android

This visual novel where you will play the role of the protagonist (Raiga), the blue dog who keeps his sexuality a secret to others. Only his gay friend, Kougi the tiger knows that Raiga is into men. Many things happened to him in the past so now Raiga lives with his stepfather, Seijirou, the owner of the famous coffee shop, Lunateria. His life seems ordinary until the day his childhood friend and crush, Rikiya comes to visit his city. Your story begins from there. You can try DEMO first at below link (PC and Mac version only).

About itch account I plan to use for promote and update my work process, so you need to support me at patreon to get game download link or contact me directly via patreon or twitter is ok.

This project is still working on process.
Latest chapter is 3 that will be released soon on April.

Important note
1. My patreon is per update, please read more details at my patreon.
2. I'm work alone all of artwork, coding and writing story that mean my process is very slow and I can do it when I have free time from my main job. (family business)
3. Please not worry about my poor english skill, in-game texts I have my friend who can fix and check for grammar and correct them.

Why did my game end so suddenly? Some of The characters shown in the screenshots on the page here we're never introduced yet...

Did I miss something?

NaruEver has a Patreon account you can subscribe to, and I'm not sure if it's worth it right now but he changed it so he receives payment every update, so not once per month like usual (others like GigaSaddle – Pervader are doing the same). Since you won't be charged for nothing there's no real reason for why you shouldn't subscribe, but I leave it to you to decide.

Apparently, updates are really slow because of his editor. Here's what he wrote last, I just fixed the language errors to the best of my abilities (there might still be errors left):

"Hello and sorry for no updates in a long time.

I got many messages about whether or not I'm still working on Lunateria or the project is dead. My project is still on-going, however, but lacking the material to update. Because of my fault, which happened to be sending the longer than previous Chapter 4 script too late, my editor, who is in fact working on several writing projects, estimates my script will be finalized around the end of the year or later. I can only wait, yet instead of wasting my time I already did what I can in advance:

–check overall gameplay like character expressions, sound, and music to match with scenes

–might start writing the last capter's script next month"

Thank you very much for supporting me until now and apologies for the inconvenience."

Keep in mind this was already way back in August.

Until now there hasn't been a new update to reveal what state the game is in, even though I'm confident about Lunateria's return.

I'll have such a good time playing once the update arrives! One of the best FVN there is.

Coffee, wuffers& Slice of Life. Had to uninstall Taste of fire& Remember the Flowers. The athletic guys are alittle beefier than i.. nevermind

Is this vn canceled?

By comments below should still hold true, but I guarantee for nothing.

What seems to be the problem?

It seems to think that it is an update on an existing app. & Cancels.

After I tested it myself I got the exact same error. I will contact NaruEver and explain this to him. You really don't want to miss out on Lunateria that's for sure. Alright, now we have to wait for an answer...

So I tried to install another game, but guess what, the exact same error happened. Now I'm very confused and honestly a little bit worried.

i havent had that happen to me. On any other Vis Novel that wasnt in its early infantcy. Ive had my eye , a very Curious eye; i might add.. on Lunateria. For... ... Let me just say I'm Thrilled, imight get to see it.

I had same problem with The taste of fire vn, it seem both games have same name on file storage on android, third same name was old version of Remember the flowers, so if you have any of these instaled it wont install others, name of folder is com.org.androidset

no check patreons for upd

Is it visible for anyone?

No, it is far from being abandoned! :)

Check my answer below for more information.

The latest update was supposed to be released 2 months ago and and we still have no announcements about anything. i know the creator said that they will be slow in progress and they probably will forget to post announcements but so much time passed that it became concerning. Is the creator ok?

He seems to be doing alright, since he posted an update on Patreon in August. He says that his editor takes a long time, because they're working on many writing projects simultaneously. Unfortunately it will take at least till the end of the year for them to finish according to NaruEver. In the meantime, he's practically almost finishing the writing part of the game, apparantly pre-coding as well as checking the overall gameplay and completing new art sprites.

I don't know whether the post is visible for everyone or only patrons.

From the looks of it, the game is far from being abandoned!

When a new update

Really enjoyed this VN, look forward to the updates and options to date different characters.

ill pay for the same demo on steam

happy new year and also I love Lunateria , thank you!

is there am update coming soon? i really enjoyed this

Is this vn still doing well? i really like it

I can't install the android version. It say update patch but I didn't install game before. Anyone can help me ?

When chapter 2 coming for free, I really liked this vn, u done really a good job even when u done it all by ur self, pls do keep up and take care of ur self in this pandemic

im keeping an eye on you

Thank you very much ><

When the next update is coming out???

'After take a break, I will start working on Lunateria chapter 4 soon. It must take a long long time as one man work and I can do when free from my real job only. So, I can say there will no new update for a while.' is what they said. so it'll come when it comes we just gotta have patience

Nice, thank you for the update!

I'm currently playing on Android and I'm curious about one thing. Currently that build ends after the first day for non-patreon, is that correct?

Yes, for demo test is chapter 1 only.

I see. Thanks for the clarification! 😄

Yeah the developer is alone tho so its gonna take some time :(

Yes, I still doing on my own pace that pretty slow and due to Covid issue I must to focus on my real job first then continue my VN on free time

I really like it, but i have one question: is it possible to somehow go back in the game, because sometimes it's inconvenient if you missed something, especially if it's something important?

No, because some choice give player a relationship score so it's impossible to go back but you can use log icon to read previous dialoague.

Just a question I don't want to Uhm feel spoiled or some stuff.

Will you release a free version of the game when everything is finished?

I might update for longer DEMO play in future when chapter4 released, about free for entire game I can't answer yet ><

Oh alright, And btw. Can you choose who you'll be in a relationship?

Is there a other update on your patreon ???

Also i dont know if im doing somethings wrong or is it supposed to end on the first day ?

Your alone ???? But the game is amazing

Great game. But Seijirou looks too depressed. It's hard to look at him while reading the dialogue XD.

I dont fully expect an update for most likely the middle of july or even august if ye work, honestly I'm starting to really like this vn, I hope the next update is nice and juicy cant wait to see more beautifull progress

Tell the truth, it's impossible even fall or winter for next update >< but will try my best, thank you very much.

When will the update be out?

I do my VN after I'm free from my job only, so it surely take very long time for next update><

K so in a month or less I hope ? Either way amazing game <3

Tell the truth, it's impossible TwT but I will try my best.

How do i get a longer story ? It keeps stoping on raiga sleeping on his decision

Thats all thats available for now, The other contents are available in patreon, But I think this will also update after a few days or weeks

For get latest update (chapter 3) you can pay for it via my paypal.

ok I messed up I think I wasted 5 dollars on the coffee patron so do I still get it or no ?

Please no worry, my patreon is "per update". Although, you support my patreon it still not charge your money yet. (for more detail please message me at patreon.)

Can someone tell me the best choices for best outcome with rikiya?

And just to make sure does it end with raiga sleeping just making sure ?🤩

Yes, demo is full chapter 1 and it's end at Raiga bedroom scene.

Woah~ this is amazing~

Thank you very much >w<

when will the next build come out, i am really into this novel!

My process is really slow, I can't define when it will finish >< because I can do when I'm free from my real job only. 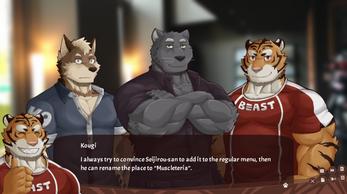 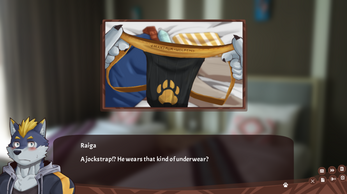 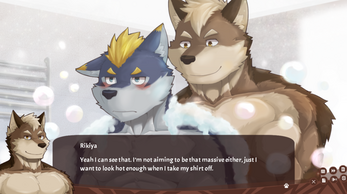 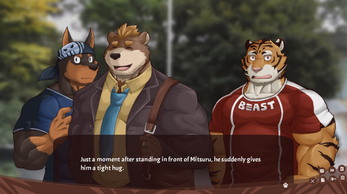 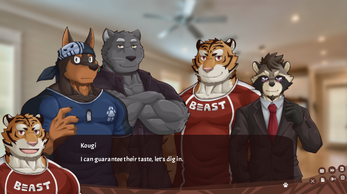